Speaking Up for Stomach Cancer

When we started this journey and created this blog, our intention was to post regularly. We’d seen several people be active bloggers but stop posting as they moved further out from surgery and we didn’t want to do that, but that’s exactly what’s happened. Life has been blissfully normal and quiet lately, so we really haven’t known what to post. 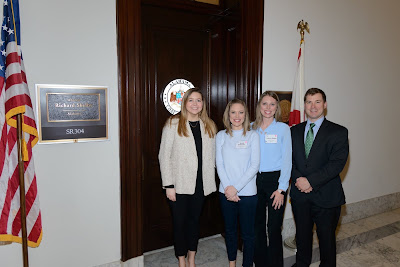 We did step out and do something out of the norm last week though. We traveled to Washington D.C. and on February 11th we gathered with almost 100 other stomach cancer patients, caregivers, and supporters to participate in Debbie’s Dream Foundation’s 8th Annual Capitol Hill Stomach Cancer Advocacy Day. You see, it’s expected this year that roughly 27,600 Americans will learn they have stomach cancer, and more than 11,000 will die from the disease. The overall 5-year relative survival rate of people with stomach cancer in the United States is 32 percent according to the American Cancer Society. At Stage IV, the five-year survival rate is merely five percent. The initial diagnosis of stomach cancer often is delayed because up to 80 percent of patients are asymptomatic during the early stages of stomach cancer, leading to poor survival rates. At present, there are no established screening tests for stomach cancer and there are very few treatment options to offer those diagnosed with stomach cancer, particularly at late stage. These facts and statistics are not okay, we must do better. That is why we met with members of the House of Representatives, Senators, and legislative aides to discuss topics directly affecting funding for stomach cancer research.

The first major topic of discussion was requesting their support to keep stomach cancer on the Depart of Defense list of cancers for the Peer Reviewed Cancer Research Program. This program exists to fund innovative basic, applied, and translational cancer research to support service members, their families, and the American public. Stomach cancer was added to the list in 2015, and since that time the PRCRP has invested, through 34 awards, more than $17.4 million in stomach cancer research. Studies funded by the PRCRP are addressing critical research gaps and unresolved questions within the field of stomach cancer. Our ask was simple, sign a letter to the Appropriations Committee requesting stomach cancers ongoing inclusion on the PRCRP list. Inclusion on the list one year does not guarantee your place the next year, so every year it is important to go back and fight for our spot. We did get a little push back from one aide that the DoD shouldn’t be funding medical research but focus solely on defense matters; however, the reality of the situation is that to give our country the best defense possible, we need our service members healthy and well cared for. Stomach cancer is a service-connected malignancy for service members who experienced hazardous exposure to ionizing radiation. Additionally, due to past and present deployments, U.S. Service members and Veterans may have an increased risk of stomach cancer, especially if diagnosed with H. pylori. Studies suggest that the risk of H. pylori infection, the primary identified cause of stomach cancer, increases among military personnel during long-term deployment. For the most part everyone we met with was extremely positive and supportive, I think we can all agree that ending cancer is a non-partisan issue. Going into this year, only one representative from Alabama had ever signed a letter to the Appropriations Committee supporting the inclusion of stomach cancer on the PRCRP list. After last week, we except to see a few more on the list for FY21.

The second ask we brought to our Congressional leaders was focused on funding for the National Institute of Health (NIH) and National Cancer Institute (NCI). Congress has historically been very supportive of cancer research and funding for the NCI has consistently gone up. As the NCI budget goes up, so does the number of research grant applications and the demand is still outpacing the funding; there simply isn’t enough funding to support all the wonderful research ideas out there. In order to support a robust suite of research opportunities we asked Congress to fund the NIH at $44.7 billion for FY21, a $3 billion dollar increase from FY20. Of that amount, the request is for $6.9 billion for the NCI, a $500 million increase. In our home state of Alabama we actually have a few institutes that have benefited from funds from the NIH/NCI, including the University of Alabama at Birmingham (UAB) the hospital that has taken care of Nicole and I since we were diagnosed with our CDH1 mutation. I think this is the reason most of our Alabama representatives were so receptive and supportive of funding the NIH and NCI, progressive, groundbreaking research is taking place right here in our state. 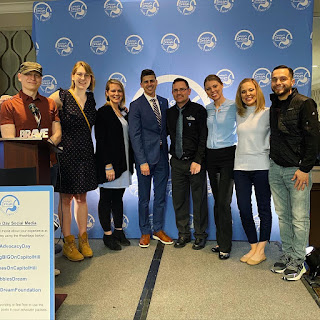 One of the best parts of participating in these events is time spent with others who have faced stomach cancer in a variety of ways. We heard stories of survivors, current patients, caregivers, people who lost spouses, children, and friends, and fellow CDH1 mutants. Most of these people we only see or talk to once in a blue moon, but they are our family, we share a bond that you can’t understand until you’ve been in the same trenches, faced the same fears, celebrated the same milestones (like eating steak or drinking your first glass of wine stomachless). While Nicole and I are called the “stomachless sisters,” the truth is we have a whole group of sisters and brothers whom we love dearly.

What’s on the horizon? We have several events and causes we’d like to push forward in 2020-2021. Here in Alabama we’d like to push our state House and Senate to pass a resolution officially declaring November “Stomach Cancer Awareness Month” in the state. While this seems largely symbolic, the truth is that stomach cancer is something most people don’t have on their radar, they don’t know the early warning signs and as mentioned earlier, that leads to a late stage diagnosis and lower survival rates. Any measure to draw attention to the disease can only help improve public knowledge and even if it only leads to one person pushing for early testing, one life saved would be worth every effort. In October we will be back in DC for No Stomach for Cancer’s Spotlight on Gastric Cancer event. This falls event will be very exciting as it is set to include Dr. Parry Guilford, the man who discovered the CDH1 mutation and is tirelessly working toward a better treatment alternative for our children. We are also working with our team at UAB to hopefully host an event for NSFC here in Birmingham in the near future. UAB is an amazing facility, one of the top 10 hospitals in the country, but somehow it doesn’t seem to get the attention or credit it deserves, and we would love to see UAB recognized in a national program supporting stomach cancer patients. Supporting fundraising efforts for No Stomach for Cancer is always at the top of our list. With that said, we are looking for ideas for fundraising events that are unique, that people would want to participate in, and that could be carried out simultaneously across the country by other NSFC supporters. Please bombard us with ideas and as we come up with things, we will post them on our Facebook page for feedback.

Almost four years have passed since we started this crazy, stomachless roller coaster. It seems odd to say that we are grateful for surgeries and losing body parts, but at the end of the day this gave us the best shot at a long, healthy life and that’s so much more than many people get. We are also incredibly thankful to be surrounded by family and friends who support us, take care of us on rough days, and always champion the cause of stomach cancer. We love you guys!

Posted by Stomachless Sisters at 8:49 AM No comments: